I was intrigued by some new Papermania stamps designed by Michael Powell which really made me think of Portmerion and the TV series from years ago called The Prisoner which was filmed there (hated to miss an episode of that one!!).  The scenes are unusual in that they are only partially coloured with some details being left as line drawings although of course there is nothing to say they couldn't be completely coloured.  However I decided to go along with the illustration on the packaging and used Polychromos pencils in many colours blended to create a similar effect to his watercolouring.  I found some toning background paper amongst my stash and used a Sizzix brick wall embossing folder on a piece of Core-dinations card to make this into a simple card. 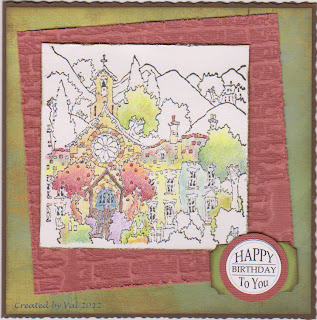