Still Away with the Fairies

I believe there's a saying 'a cat may look at a King', but this particular one is gazing at a fairy, poetic license maybe 😉.  I started by masking off the edges of my card with low-tack stencil tape before adding some thin gesso through a leafy stencil to act as a resist. When dry this was followed  by lightly brushing some colour; then stamping the fairy and toadstools.   A little bit of second-generation stamped text was added for interest and a simple sentiment, leaving the cat to be stamped after the masking tape had been removed.. 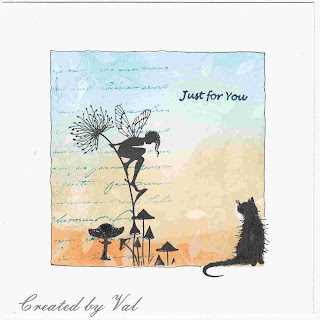 Fairy, cat and toadstools - Lavinia stamps
Text and sentiment - stamps from my stash