Back in the Swing

As mentioned recently I've not made many cards since the beginning of the year but I think I'm back into the swing of things now which is just as well because I have such a lot of 'stuff' to use and enjoy.  Whilst thinking about what I could make the idea of using a die to dry emboss surfaced so I found a die suitable to use as a background and, once embossed, I left the die in place and inked through it in a few different colours.  I've also used the same die to lightly stencil a shadowy design onto the base card.  The next move was to die cut some layered flowers and leaves using heavy watercolour paper (300 gsm) and then inking the flowers using blending brushes.  Left the leaves white on this occasion as I didn't want to introduce green which might clash with the background colours.  A small piece of the same paper was coloured with ink before die cutting the sentiment and I drew around the outline of the die so that I could fussy cut a backing for it.  Once all this was done the card was fairly quick to put together. 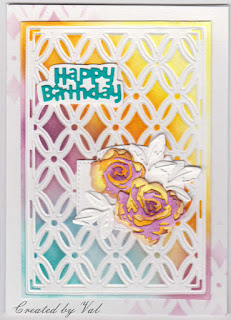