I was asked recently to make a card for someone who is particularly interested in sewing, patchwork and quilting so I had a trawl through my various stamps and dies etc to see what I could conjure up. I started by looking at Craft Artist and found a sewing machine image which I scaled and printed onto a piece of patterned paper.  One of the magazines a while back gave away a set of dies and stamps which were sewing related and I cut the thread reel and two 'patches' using that set.  The buttons were die cut using another die which I've had for ages.  Stork scissors cut in gold card from another ancient die.  Finally finished off with the numbers in gold on a banner - all placed onto some background papers which look somewhat like patchwork fabrics. 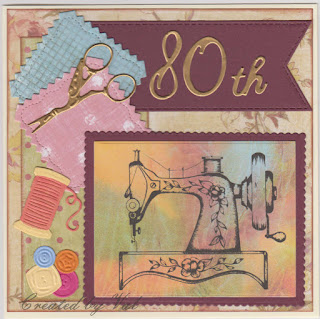