After having a bit of a sort out of my 'stuff' I had an idea for a card using a couple of sets of stamps which I've had for simply ages, neither of which has seen the light of day for some time and in fact some of the stamps in the sets have never seen ink - how bad is that???  Having played around with them on some scrap paper I came to the conclusion that for once the Misti wouldn't do the job but luckily I still have a 'Stamp-a-ma-Jig' gadget so resorted to using that on this occasion.  After a few trial and error efforts I managed to get things lined up and this card is the result - quite pleased with it eventually and it certainly kept me occupied for a while.  I cut the resulting image with an oval die and a scalloped layer using the next size up; found some background papers in the right colours; added some die cut corners and that's it.  I like to keep some cards in my box with no sentiment and no words inside and this one fits the bill. In hindsight (a wonderful thing) I think the leafy branch would have been better in green but I didn't feel up to doing it all again so soon but maybe a variation will appear at some point. 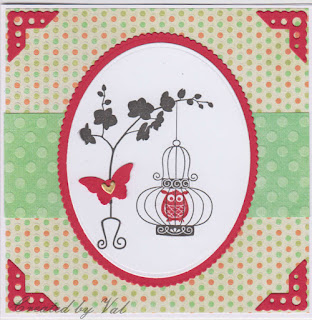 Stamps - World of Dreams Stampin' Up for leaves
Stamps - Aviary Stampin' Up for stand, cage and owl
Butterfly - punch from SU
Corners - die from Whimsy (very old)
Ovals - die set from Tonic
Posted by Aquarius at 09:17