One of my recent cards left me with a spare die cut frame which I was determined to use so I've built up a card around this item using an off cut of patterned paper which just happens to have part of the design which just fits nicely into the frame..I actually decided to cut another two of the small frames so that they could be layered up to give it some dimension.  This in turn has left me with some small rectangular and square pieces which you can guess I probably won't be able to throw away!!  I've used a larger off cut from the same paper pad as a background and die cut a lace border in the matching lilac shade.  The sentiment was computer generated and punches used to cut out the shapes.
Now to decide what on earth can I make using a little collection of plain card squares and rectangles?? 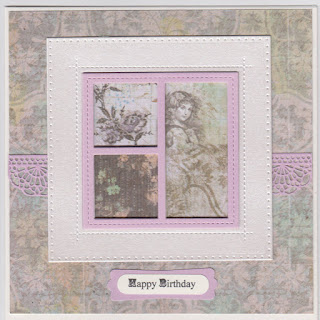