I'm sharing a card today which is made using mainly bits and pieces of card which I found during a recent sort out.  I used some mauve pearl card trimmed to slightly smaller than the base.  This piece was die cut using a shaped die which leaves a stitched effect on the aperture rather than the cut out piece.  There is a circle die in the same set which also leaves the stitches detail on the frame and this was used to cut a circle from a piece of embossed purple card and some card coloured with inks was placed behind this.  These pieces were each only just about the right size so I had to be careful with the lining up.  The remaining scraps were used to die cut the two layer dragonfly and the words - finally I had just enough of the pearl card to die cut four fancy corners. 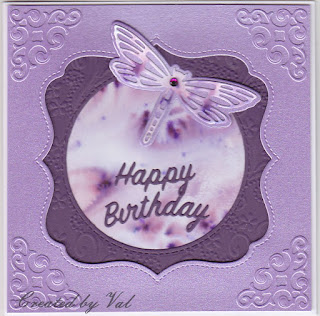 Stitched Effect dies - die set from The Works (also included the greeting dies)
Dragonfly die - also from The Works
Corners - die I've had for many years - Leabilities I believe
Posted by Aquarius at 14:30