I've embarked on a crochet blanket project using Stylecraft Yarns and with instructions being available to download over a period of time.  You can see details HERE - part one was available a week ago with part two following yesterday; next instalment due 4 October.  My local store is featuring the colourful yarns shown on the promotional leaflet but of course this could be made in any number of versions depending on your colour preferences.  In fact there are quite a few variations appearing around the internet already.  I decided to go with the bright Carousel colours and immediately made the central motif which was the first instalment.  I've now started on the second section which is a series of segments which all have to be joined and attached to the central motif - photo shows just the first two sections laid out for the moment because these will take me a while to make  and join all sixteen of them.   I did have a spot of bother with their instructions for joining the sections together and eventually gave up and simply joined them in my own way with double crochet (single crochet for American viewers).

I'm already looking forward to seeing what the next set of  instructions brings!! 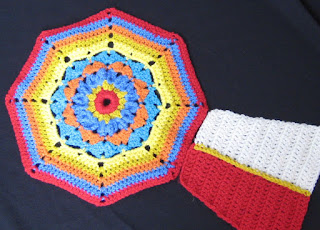