I've Actually Made a Card!

Yesterday the postman brought me an interesting package containing dies which I just couldn't resist from the new Stampin' Up catalogue - Swirly Scribbles which also have stamps to go with them which I have so far resisted!!  I knew as always there were lots of snippets around on my desk and in boxes so I found a scrap and cut out one of the dies which made me think of a leafy tree.  I then stamped part of the tree from the Sheltering Tree set but after inking I wiped away some of the ink from the outer branches before stamping, added some grass and a sentiment before cutting out with a Sizzix square die.  This was layered onto another snippet of matching green.  I knew that somewhere in a little plastic storage box I had sundry left over small die cuts and  luckily there were a few birds and a cat.  The swirly green die cut was added to the tree as leaves, birds perched amongst the branches and the cat quietly wandering by in the grass.  The black and green layer was an odd piece of card which had been embossed and then rubbed over with metallic gilding polish - this snippet was also just lying around unused!

You've probably guessed by now that this card is for the Pixie Snippets Playground which makes me realise it is a week since I posted on the blog. 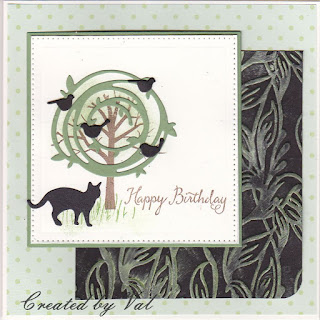