At a recent quilling workshop with Jill we were introduced to butterflies and I've been practising some more at home.  The orange butterfly and the dragonfly were more or less completed during the class.  I've since made the larger butterfly based on one which I spotted on Pinterest and I'm aiming to quill some flowers so that I can build up a picture to pop into a box frame using this one.   I've not decided yet what to do with the smaller butterfly or the dragonfly.  There has been some progress with the alpaca shown recently in that I managed to get a larger box frame but could only find a square one which means he will need a friend to keep him company otherwise he will look lost on his own (maybe another sheep) - watch this space!!  I'm enjoying the quilling but realise that it really is something which needs to be done regularly to keep my hand in otherwise the shapes I make aren't as uniform as I'd like although of course they can be slightly 'reorganised' when finally gluing them down on a project. 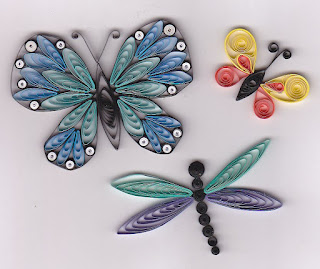