Hopefully I'm catching up with myself a bit but only because I was awake soon after four this morning with no chance of getting back to sleep so I decided to get up, have breakfast and then into the craft room.  Mind you it feels like almost lunch time now (or at least elevenses!!).  I think I'm in time for the Make My Monday challenge which is to use the complimentary colours of  PURPLE AND YELLOW  and because I've used an embossing folder which has lain unused for such a long time and a small dragonfly X-cut punch equally neglected I am putting this card in for Judith's Forgotten Friday challenge as well. Background paper was a piece from my scrap box and of course the die cuts and punched elements used more scraps.  Embossing folder is from Cuttlebug, as is the word die, the large dragonfly was cut with a Sizzix die and Memory Box Tessatina die for a border.. The yellow card is from Coredinations whitewash range and has been sanded and inked with Lemonade Distress ink to bring out the colour.

I'm off now for early elevenses!! 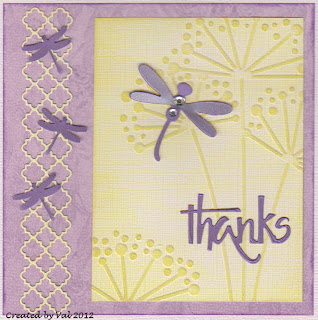