It is rarely I have my act together enough to cover more than one challenge at a time but I've managed it this week with the St Luke's charity which is a seaside theme and the CD Sunday challenge where they are asking for buttons to be included (there is also a prize up for grabs here so trying my luck).  I chose the image and background paper from Joanna Sheen's Cardmakers Year CD which I've not looked at for a while but as I had no suitable stamps for the seaside theme I thought maybe there would be something on there amongst the summer months and I was right - several to choose from in fact.  I used a mask to emboss the stitchy grid, added some ribbon, flowers with button centres and a sentiment produced on the computer. 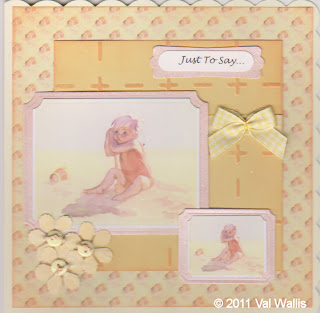