This card came about because I was having a long overdue clear up of the working space on my desk.  I'm sure you all find the same as I do in that the actual work space seems to shrink at an alarming rate until it turns into something akin to keyhole surgery.  I often wonder if it is worth saving almost every scrap of paper and card which is inevitably left over after making a card, not to mention numerous surplus die cuts etc but I'm afraid the hoarder in me just won't let me throw them away.  I do try to use all the oddments but they do accumulate and often making use of them leads to searching for more paper or card to go with them, which in turn leads to even more left overs and isn't really the most efficient way of working..  I must say I've been toying with the idea of gathering up all the scraps and putting them into the recycling box (without even looking through them!!), and starting from scratch but so far haven't been brave enough 🙄🙄.  I've been crafting for a long time  and I wouldn't be at all surprised to find bits and pieces from the early days still lurking at the bottom of some of my boxes..

Anyway, back to today's card which started because I found a stray donkey which reminded me of an idea which I'd spotted somewhere (Pinterest probably).  Of course I needed more than one donkey so had to stamp, colour and fussy cut another one.  I had a piece of white card handy into which I cut the narrow strip apertures and then selected some patterned paper and plain toning card.  The sentiment was stamped onto the bottom of the white card and a couple of the fall-out pieces were used to ground the two donkeys. All layered up using thin foam pads. I thought this was a fun idea for a card but afraid I couldn't find the source again so can't credit the originator of the idea - sorry. 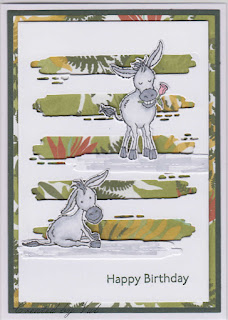