Sorting out my stock of cards I realised that I was a bit short on boy baby cards - plenty for girls though.  I decided to make at least one card in blues and for this I've used a kangaroo stamp and of course the baby roo which were coloured using alcohol pens and then fussy cut along with a little cluster of hearts.  The white circle was die cut from a piece of card which had been stamped with a woodgrain pattern and I've added some more die cuts for background along with a sentiment and three punched white hearts. 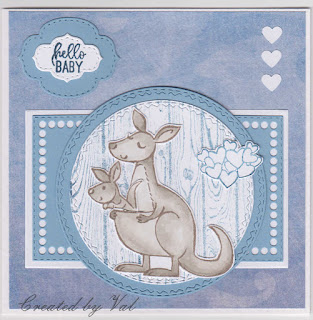