Time again for another challenge at Allsorts and this time the theme is **masculine** and the design team has come up with some great ideas for this often difficult card theme.  Mine this time is for quite a young male and I've used a digital image from a CD which has been in my collection for many years.  I've been having a bit of a clear out of CD's and DVD's many of which are quite old but in doing so of course I had to look at lots of them to remind myself of what they contained.  Luckily this one which features Teddy bears still works  even though it says it requires Windows 98 😉.  Once printed the bear was die cut using an oval die and a scalloped oval die used for a second layer.  The two blue balloons were die cut and added as a little extra touch. 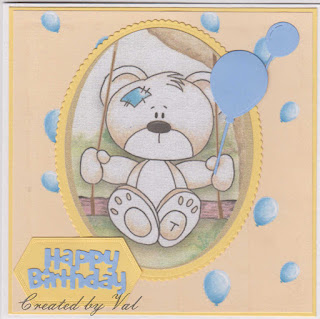