Time for another challenge in the Playground with the usual super prize and some news about the future - read all about it HERE. My card has quite a few snippets included but for some reason the snippet mountain doesn't seem to diminish.  Everything here apart from the 5 x 7 card blank has come from my various snippets boxes.  I started by stamping the garden gate and then die cutting it into a rectangle, cutting another larger one in kraft card to back it and also cut a scalloped strip of green and some suitable patterned paper as a background.  The die I used for the toadstool border was cut from a cream snippet and coloured with alcohol pens.  This border came as a surprise because I had assumed that it was a floral border - it has been in my stash for a while and this was its first outing.  Green wellies and flower pots were die cut from other snippets and the sentiment was lying on my desk, made for a different card but not actually used.  Final touch was a tiny flower and leaf spray from a pot of left over  die cuts 'too useful to discard' 😉 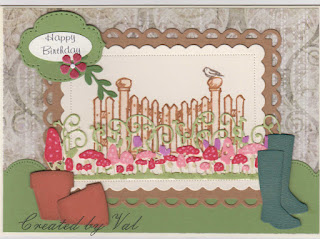