Well, we have a great new look to the Snippets Challenge and a slight change of address as well - read all about it HERE.  There is a smart new logo and badge to pop onto your sidebars too and a followers list to join so that you can keep up to date with what's going on.  The usual rules apply about using snippets and saying which those are so that it is clear that at least one of the components is a snippet - the more the merrier.  As usual there is a great prize for the lucky person whose name is picked in the draw at the end.

Everything on my card is a snippet, apart from the card blank which is a 6" square one.  I started with a fairly large snippet of white which I smooshed through some watered down Distress Oxide ink on a glass mat to give the appearance of a cloudy sky.  Various small rainbow-coloured snippets were die cut and glued in place for the rainbow, more white snippets for the clouds which have had their edges sponged and the words were cut out of a sheet which I'd run through the printer a while ago with a wide selection of words which I thought would be handy for adding to a variety of cards.  Simply added the raindrop style gems for a bit of interest.  I have quite a few of the coloured rainbow arcs left over and am debating whether to use them on another card, even though they may not be in the correct order - not sure if I'd be happy with that idea although I have seen illustrations with 'wrongly-ordered' rainbow stripes which I'm afraid goes against the grain for me 🙄🙄

As this card was made using something new (the rainbow die set) I'm also popping over to the Allsorts Challenge Blog where their theme is Anything Goes with the added extra of using something new and I'd treated myself to these dies and matching stamp set just before Christmas. 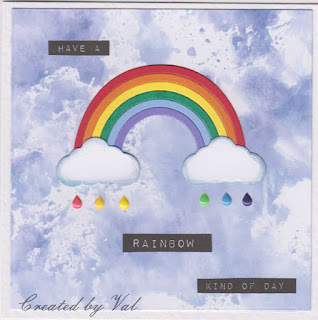