Working my way through my seasonal crafty stash and this time I've tried combining a large snow globe die with a magazine freebie set from 2018.  I wasn't quite sure how they would work together so I had a sort of dummy run using some odd pieces of card and paper to try out a few ideas and I finally decided that I needed a circular die as well which would fit behind the aperture in the globe (which cuts only one layer) so the various layers of the scene were die cut from three separate circles before being layered up onto a grey whole circle (the sky).  This was finally assembled using a mixture of thin foam pads and glue to account for the different thickness.  The words were stamped and embossed in silver.  I'm so pleased that the idea which I had in my head actually worked out and I think there could be a few variations being made using other small die sets within the snow globe. 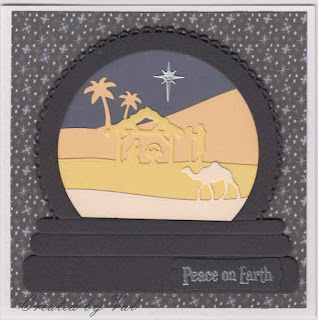