I have a male themed card to take along to the Playground this time and as usual quite a few varied snippets have been used in the making. The background paper is one which was given away with a magazine and I've over stamped it with some images to give it a bit of interest.  Snippets of cream card were used to stamp the watch, pointing finger and the sentiment strip, cut out using scissors.  Various cogs were die cut from snippets of black card and brushed over with Treasure Gold before popping onto the card.  I'm just playing along for fun this time but there is the usual interesting prize on offer to one lucky person. 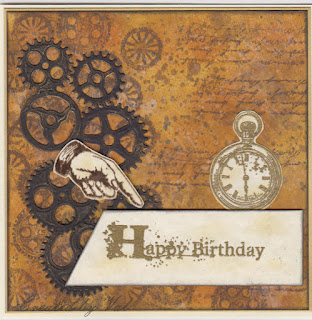