The stamp used for this card came with a magazine some time ago.  There were four little sets of stamps and stencils and I've often used the little stencils but the stamps remained uninked until now when I spotted these two little birds amongst them.  I added the hearts using a fine black pen and then coloured using pencils before die cutting the double pointed banners.  I tried several ways of using this without success until I suddenly thought of using a large heart behind the image and a couple of flowers and a leaf which were hanging around on my desk and now it has turned out as a 'congratulations' card for maybe an anniversary or engagement. 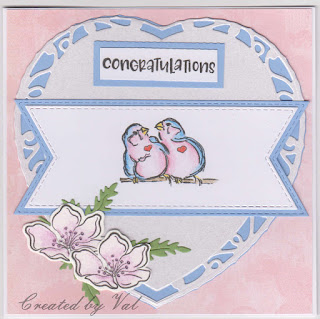