I was amazed this week to spot that one of the Craft Channels is having a Christmas week and it is early June - I'm sure they get earlier every year.  It so happens that I was lucky enough to win a give-away from the lovely Christina's blog.  This arrived and as it is a Christmas magazine with stamps and a die I thought I'd have a play and make a quick card - very similar to one of the examples in the magazine. It did feel odd making a Christmas card so early and I've now put the items away into my Christmas crafty box until a bit closer to the time.

I used some of the background paper which was included and also one of the toppers which has been die cut so that the petals of the poinsettias will stand up when tweaked and yet be flat for posting.  The sentiment was also amongst the paper pack and I've added some Glamour Dust and Stickles to the flowers for a bit of glitz
. 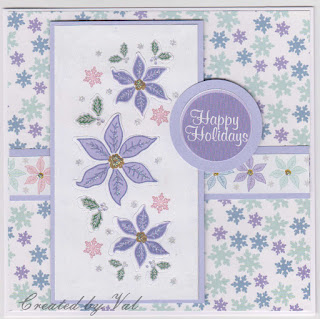 Items used all from Stamps by Chloe magazine kit
Posted by Aquarius at 13:44