There was a magazine freebie recently which I was unable to resist - a stamp and die set with a weather theme.  What particularly pleased me was that the umbrella die included both a whole shape of the open umbrella and also the part which could be cut separately for the coloured sections - very good for a freebie I thought so thanks Clearly Besotted for such a good die.  I cut two layers in white and carefully lined them up and glued together before cutting out the top sections using scraps of blue and pink card so that these could be 'paper-pieced' into the shape; finally I used one of the stamps to add grey to the handle (using the Misti) which made that straightforward.  The wording at the top, the clouds and raindrops were from the stamp set, although the clouds had to be fussy cut with scissors.  The message at the bottom used a stamp which I've had for ages.  The sky effect was achieved by smooshing some distress ink onto a glass mat, spritzing with water and then sort of mopping it up with a square of watercolour paper.  There are several umbrella stamps within the set which I've not used yet - plenty of possibilities. 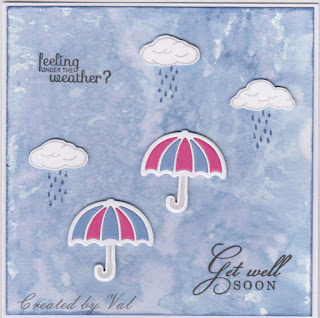 Stamps and Die set designed by Clearly Besotted - free with recent magazine
Get Well - stamp from a really useful free set which I've had for ages
Background made using Faded Jeans Distress ink on watercolour paper
Posted by Aquarius at 10:53