I decided that my box was short on male cards so yesterday I set about making some backgrounds by embossing white card using various 'industrial' style embossing folders and then colouring with Distress stains and inks along with some metallic stain.  Good idea to do most of the inky jobs in one fell swoop and then have a major hand cleaning attempt.  So far I've put together three cards and this is just one of them - they have similar components but are not all the same.  For this one I cut three strips from the inked card, die cut a motorbike and added a bit of over-stamping to some text background paper. Of course most of this is covered up with the strips but not to worry. The bike was layered onto a scrap of text paper which in turn was layered onto another left over strip of a different text paper.  A selection of cogs were die cut from black card, embossed with 'industrial' folders and rubbed lightly with Treasure gold. Sentiment was produced on the computer and punched out.  I had intended going for a walk today but became engrossed in making these cards - now it is lashing with rain so the furthest I will be going is to put the wheelie bin by the gate. 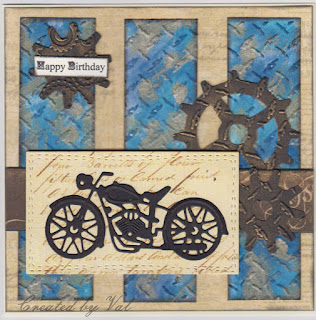