Apart from the card blank this card is made entirely using bits and pieces left over from a variety of other projects and which were lying around on my desk with the smaller items being 'saved' in little containers. This of course makes it a good card to take along to the Playground for the Snippets Challenge.  As usual there is a super card made by Di to show an interesting way of using what will be the prize this time around - why not pop along to take a look?

I started with the coloured wavy line borders and then looked for other bits which would tone with them.  The two circles were plain but I embossed the larger one and sponged with some ink, then added the die cut motor bike to the kraft circle.  The banner was already stamped with a sentiment but I also sponged the edges of that to match the other pieces. Next I went to a pad of script paper which I have and searched amongst the off-cuts which I keep in the back and found a suitable piece for the background.. 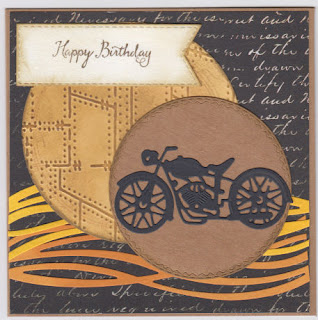