While I had the alcohol inks out on my desk I decided to use them on some Yupo paper which I bought ages ago and which, to my shame, I'd never used for some reason.  I'm sure I'm not the only one guilty of buying things maybe at a show, bringing them home and promptly forgetting to actually use them.  Anyway I did enjoy my recent dabble with the alcohol inks and in this case once the surface was dry I popped a stencil onto it and applied a little of the blending fluid using the felt applicator - this had the effect of lifting off some of the ink to leave a pattern.  My next move was to find some scraps of white pearl card, the largest of which was coloured with the same shades of alcohol ink before die cutting a large oval.  Smaller dies were used to cut a frame and an oval to back the stencilled piece before layering it all together.  I wanted to make a feature of the stencilled pattern so have simply added a die cut sentiment with its own backing.  A linear design was added to the base card before adhering the ovals into place for this CAS style of card. 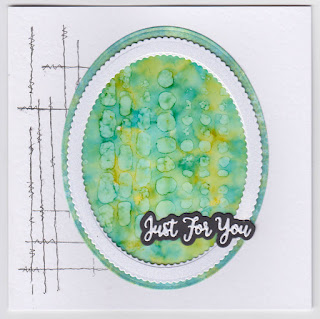