I'm still working hard to reduce my ever growing piles of snippets and several pieces of reasonable size have been used up on this card for the current Snippets Challenge.  Of course, as we all know, if you cut a piece from a fairly large snippet you are then left with at least one smaller snippet and so the heap doesn't really diminish.  For this card I've used dies from two different companies, an embossing folder and punches.  The two 'bow' pieces were die cut from separate scraps of matte gold card and put into place onto a large snippet of brown.  I found a strip of cream pearl card which had been embossed and was left from a previous project, and wrapped a snippet of brown ribbon around. My next move was to cut the various layers of the die cut shpes on the top layer again using gold, brown and cream snippets.  Finally I punched a sentiment from a partial sheet of computer generated greetings, punching a gold scalloped oval to pop behind it.  There are quite a lot of layers on this card so a reasonable amount of snippets used.  As always there is a great prize awaiting one lucky winner. 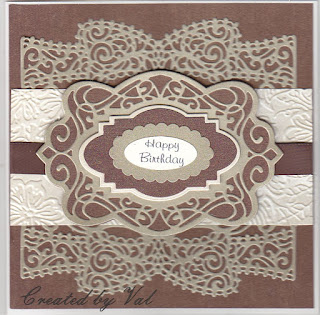