Time to spin the wheel at the Butterfly Challenge and this time the letter is 'Y' and I've actually managed to include all seven selections which are Yale blue, yellow, yew, yarn, you and finally your choice (yellow gems for me).  I started out with the intention of cutting four corners using some small pieces of Yale blue card but had forgotten that the die doesn't have an outside edge (not used it for ages) and I didn't have a larger piece of the right colour to cover the whole card. Best laid plans and all that so a rethink was required making use of the small piece of blue rather than add it to my left overs.  There was enough to cut one layer of the butterfly in blue with yellow for the background.  I happened to have a sentiment which includes the word 'you' on a scrap of white card so used two dies to cut out the two layers, adding some yarn on two corners of the blue rectangle.  The piece of yellow background was from an ancient Papermania pad and finally I added some yew leaves and the 'your choice' of yellow gems.  Whew that took a bit of explaining!  Do pop along to the butterfly blog to see some great inspiration and maybe win a prize if you take part. 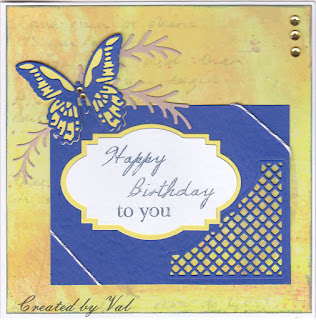