Yesterday I spent some time die cutting a selection of seasonal bits and pieces so that they are ready to hand to make a few cards today.  In the end I only had time to make the one because I had the offer of being taken out shopping - nothing exciting, just food but it was an outing.

I started by cutting a square on which to put the wreath - doubled up one in brown and one in kraft - then I assembled some of the flowers and leaves before adding a bow and the sentiment.  One more card for the box but still plenty more to make. 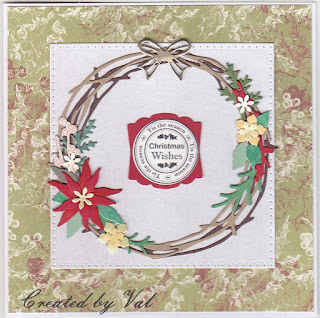 Square - Noble pierced squares die by Sue Wilson
Wreath and most of the flowers/leaves - Sizzix die
Bow and a few odd small flowers - a freebie die and some punched 'waste' from a border die
Sentiment - from Netty's cards on punched shapes by Stampin' Up.
Posted by Aquarius at 16:22