I've settled into making some Christmas cards mostly using up pieces of backing paper which I've had for some years and of course delving into my boxes of snippets.  I was rather caught by surprise when I die cut this large holly sprig because when I bought it I'd not realised that it cut the leaves out with separate outline, veins and the inner parts of the leaves.  However I found another shade of green to cut out another one so that I could mix and match and helpfully the berries are separate as well.  I had thought the whole thing would cut with maybe embossed details for the veining - that will teach me to look more closely in the shop!!  The 'joy' die was much more straightforward to use.  A piece of paper with music and holly sprigs was used as a background and I've kept the whole thing fairly flat for posting. 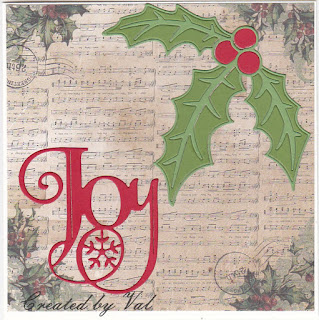