Apologies for Being Missing - Again!

I'd not realised just how long it is since I last posted a picture on here until a friend pointed out it was five weeks - how bad is that eh???  Anyway I made a rare visit into town yesterday and of course had to glance at the magazines - in fact I picked one up, put it back and then would you believe picked it up again but it does have a handy set of Christmas dies even though I don't actually NEED any more seasonal 'stuff'.  As there are lots of small dies in the set I was able to use up quite a few of my snippets to take along to the Playground which I've missed for a couple of times so I'm not sure if I'll be allowed in. As usual there is a great card for inspiration and a super prize on offer for a lucky person.  If you love dogs it is worth a visit because there is a new cute furry friend who has arrived to live at the Playground - aaahh!!!

I started by finding a snippet of blue card and a smaller one of white pearl which I die cut into a snowy hill to add to the blue layer.  I then used the jar die to cut out an aperture which was backed with another white snippet (embossed with falling snow design).  The jar has an outline die and an inner one so I was able to cut a silver frame to pop into the aperture.  I then set about cutting out some gingerbread men, snowman, trees, a label with wording and holly all using some really tiny snippets which were a fiddle to glue into place and, being out of practice, has taken me most of the morning but at last it is finished!! 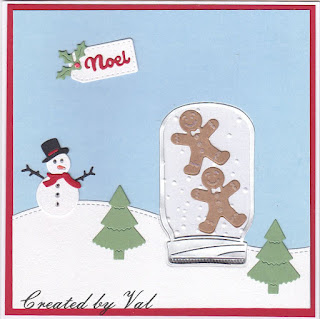 Snowy Hill - die from Lawn Fawn
Embossed snow background - Sizzix die for Stampin' Up
All other Dies - from set given free with Die Cutting Essentials magazine
Posted by Aquarius at 11:41