Home Decor for the Playground

It's time for the fortnightly challenge in the Playground and I thoroughly recommend a visit to see the great card made by Di with some oh so cute little elephants. This time I've made a home decor project using some of  my snippets - mostly tiny ones though so I still have loads left!!  This is a deep box frame with a 6" aperture and the two large squares are 'waste' from previously cut square pierced frames.  Two narrow strip snippets were used as a 'perch' on which the peacock sits but it is the bird himself which has the large number of tiny snippets used for the tail feathers and wings - even the body was cut from a larger piece in the blue snippets box - and yes I do have them colour-coded!! I was so pleased that I have a small die cutting machine because it would have seemed a bit silly cutting those tiny tail feathers on an A4 model!! I added a simple quote - more snippets of white and blue card and there it is - a piece of home decor for a change. I dithered about painting the frame but decided in the end to leave it 'as is', at least for the time being.  Apologies for the quality of the photo but the light wasn't too good yesterday afternoon. 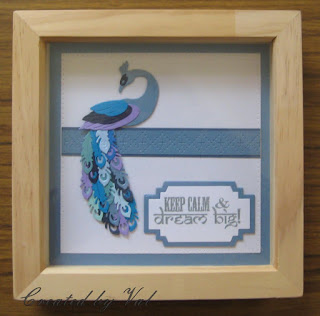