I'm not at all sure when this post will actually appear although I have scheduled it for a specific time just to see if this function is working properly after recently having to replace the battery in my 'tower'.  It never seemed to work previously which is why I rarely do it.

I promised a friend that I would take a photo of a little gift box made using a Tonic die which I've had a while and it has been waiting patiently to be used.  I got the impression when I saw the die used on TV that it would make a larger box than it does in reality and I've had a little 'glitch' in trying to find suitable small items to pop in as a gift.  In fact I was going around the supermarket and Boots the Chemist this week with a 6" ruler measuring things like tablets of toilet soap (too large)
and I guess next week I might be measuring up confectionery to see if anything will fit nicely.  I finished up by folding some socks up quite tightly to fit inside this one!

EDIT - I see the schedule worked which is great news.  Also forgot to say the box measures 3" x 2" so quite small really in terms of finding suitable contents 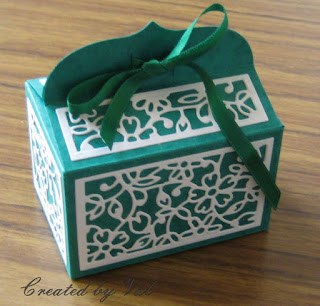