Having had a spell where I've not made much in the way of cards, I've actually managed to produce two today and one of them is for the Butterfly Challenge where the theme is DIMENSION AND/OR DENIM.  I've used an embossing folder and dies which came free with a magazine recently because I thought I really should open the packet and try them.  I found a scrap of Tim Holtz paper which was a suitable colour for the background and the embossed card is also one of his - a whitewash card which has been lightly sanded to reveal the core after embossing.  The reverse of this card has also been used for the punched flowers (Stampin' Up punch).  I was going to schedule this post but as it doesn't always work for me and we are near the deadline I will post it today instead. 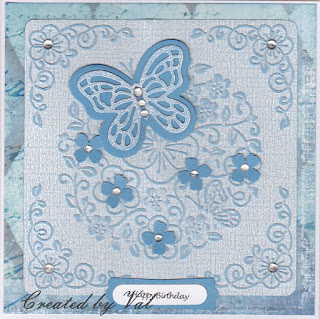