I've been keeping quite busy with various crafty things recently including some beading which I can't really share for the time being but yesterday I had a sewing session to finish off three bags which had been  in various stages of construction for a recent mini workshop.  They were made using charm squares and I've shown you pictures of them previously so won't bore you with them again.

All went well with completing these and I decided while the machine was set up I would have a go at a boxy little zipped bag which I'd spotted on YouTube.  Unfortunately that was when my day turned into one of those frustrating times when things wouldn't go right.  The problem was trying to do top stitching when inserting a zip into quite a restricted opening and having to keep moving the slider out of the way.  The zip was inserted, and unpicked twice and I eventually tried another totally different method involving extra strips of fabric which of course changed the shape and character of the item but at least my day hadn't been entirely wasted.  I contacted a friend who I know had made some of these pouches and she gave me a link to another video and also suggested that she had found it much easier to use a zip longer than the opening and then cutting off the surplus later (something which had occurred to me whilst mulling this over yesterday evening).  Luckily I found a long zip amongst my sewing bits and pieces and of course just had to try it this morning once I'd done a few boring domestic chores.  I have to say it worked like a dream with absolutely no need to keep trying to fiddle around  to move the slider out of the way of my (hopefully) straight lines of stitching.  I started with fabric around ten inches square and the zip was a long dress length one which made it all so much easier that I might now make a few more in different sizes - another way of using up bits and pieces of fabric which accumulate after making larger projects. 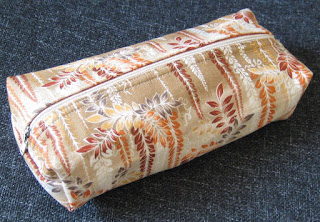