Bird Amongst the Flowers

I challenged myself yesterday to use a 'chicken wire' die cut which my friend Anne kindly gave me a while ago and after some thought I came up with the idea of making it the backdrop for some flowers.  I started by cutting a frame using Stampin' Up die (Framelits Labels) which I then embossed using a folder from Couture Creations; another shape was cut and embossed for the backing before I sandwiched the 'chicken wire' between the two layers.  Backing paper was a leftover piece from a Prima pad and a border strip was punched (EK Success).  When I was at the Extravaganza Day we used the SU bird punch which made me realise I'd not used mine for such a long time, so inspired by that I've used a punched bird to sit in the flowers which were stamped with Petite Petals set which we also received on the day.  There is a punch to match these flower stamps but unfortunately I don't have it yet so they were cut out wish scissors - leaves were cut with a Tattered Lace Die.  This all took quite a time to assemble but I'm pleased to have made use of the gift die cut.  I'm wondering now if I should have used brown for the bird, but I didn't really want to introduce another colour but I think he might have shown up more if I had. 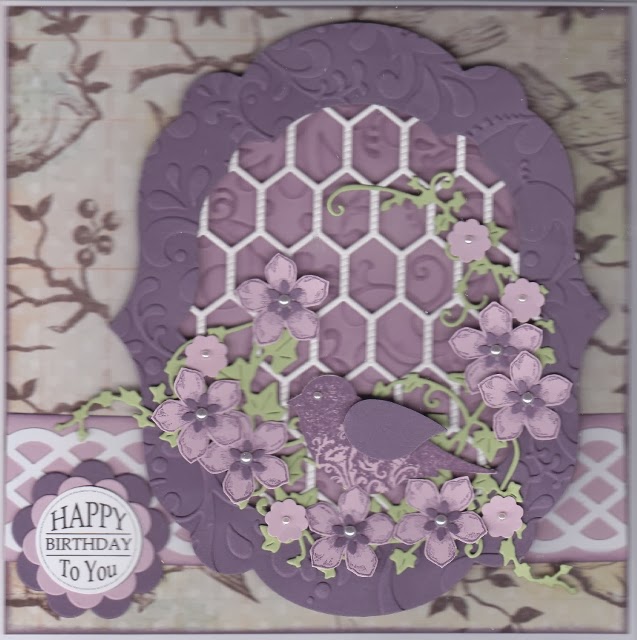