When I saw some of these ladybirds on a friend's blog I thought this would be a die which would get good use so it had to be added to my growing collection.  I have a feeling someone will soon need to start an organisation called 'Crafters Anonymous'  as it seems so easy to become an addict - harmless though I'd say and brings so much pleasure to so many people it can't be bad, can it?.  I used this cute image cut out with Nestabilities dies and coloured with Copic pens.  Background was a handy piece of paper which was in my stash and I just added some die cut grass using a Marianne die.  Sentiment was produced on the computer and popped onto a Cuttlebug die cut.  A handy card to keep in the box for maybe a child's birthday. 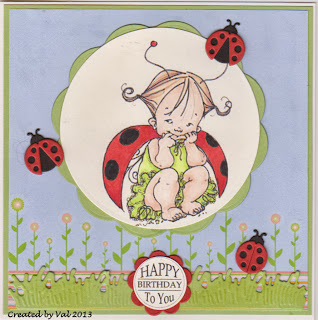