Well I was tempted to get just one set of the new Spellbinders Gold dies and went for the one which matches up with the original Labels Four.  Getting a perfect result was a bit of an adventure to say the least but I think I got there in the end.  These dies are quite intricate and they cut, emboss and deboss which seems to be what was causing me some problems.  I found I was having to put them through twice in different orientations to get the cut but my first attemps resulted in some of the  sections being only partially cut.  When I looked closely at the packaging I realised that these partially cut areas were in fact deboss sections (I think) and ought not to have cut at all.  I'm not sure I will invest in any more of these intricate dies - they seem to take ages to produce by the time the little cut areas have been pushed out and the little bits of silicone paper removed from the deboss areas.  I use silicone baking parchment when cutting some of the more intricate dies as I find it helps to release the card from the die once cut.

Anyway I eventually made a card with a couple of them using backing paper from Papermania, a stamp from Stampin' Up and two of the intricate die cuts. 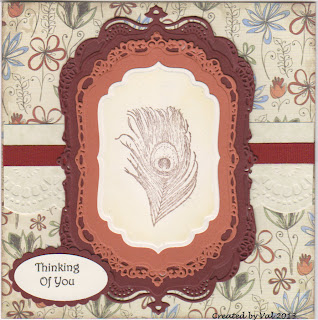