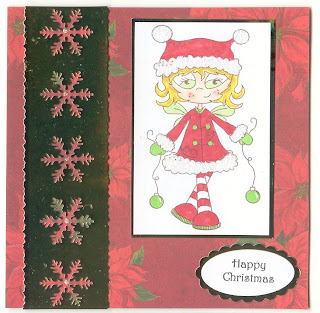 The Bah Humbug challenge this week is to use punched borders - I don't have a seasonal border punch but I do have an Xcut snowflake punch which I've used with their border system to punch a border strip in gold mirri card. Incidentally using mirri card has reminded me that I should clean the glass on my scanner more often!! This border system has presumably now been discontinued along with their original punches because their new punches are now a different shape altogether and can't be used with the gadget which is so useful for spacing rows of punched motifs. The image is a clear stamp which was on offer from Pollycraft recently, coloured with Copics and glittered. Sentiment was done on the computer and punched with Stampin Up ovals. Background paper by Papermania from a couple of years ago.