I've mentioned before that following blogs often leads me into temptation - seeing stamps or dies which I feel I NEED.  Not so this time when I saw a recent post from the lovely Jules which prompted me to search through my stamps so that I could bring a set out of 'retirement'.  As soon as I saw these flowers I realised that I've had this set of stamps for at least as long as the 10 years mentioned by Jules so I had a rootle around and found them.  I've used scraps of patterned paper to stamp and cut out the flower heads before stamping again in black ink onto an oval of cream card so that I could place the 'cut-outs' onto the stems.  just finished off with some toning patterned paper and a sentiment stamped onto a banner.  Two tiny punched flowers in the smallest scraps of the paper were added to this banner. 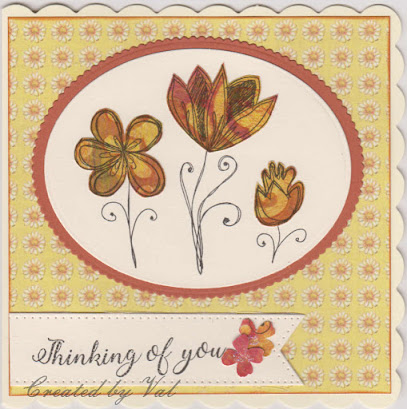 Jules mentioned problems writing a post and I've also started to experience similar glitches just recently.  I switched to the new version some time ago and it was fine at first but the main problem now seems to be the double spacing (see below) which I don't seem to be able to clear.  I also have to edit the photos to be the correct size whereas in the past they came in OK.