There seem to be quite a few ladybird cards going the rounds at the moment which reminded me that I had a lovely ladybird stamp which I've had for a few years and which hadn't been out of its box for a while. There are three fairly large ladybirds in the set so I've stamped, coloured and fussy cut them (they were produced before matching dies became the norm for practically everything). Only two here but the other  largest one has been used on another card which I will share at some point.The white die cut circle has been splattered with some green and I had a couple of suitable leaves already cut,  Put everything together onto a matching floral background and that's it - my ladybird card to join with the trend without needing to buy anything new 😉 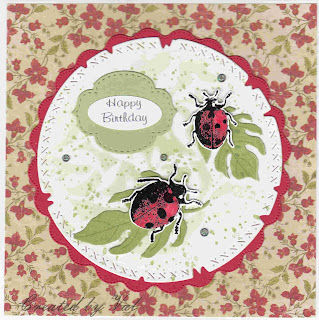