Recently I'd spotted a set of stamps and dies featuring a greenhouse and just as I was thinking of adding it to my stash, I remembered that I was trying to resist the retail therapy 😉. I decided that perhaps I could 'make do' or improvise by seeing what I have already which might be brought into play.  No greenhouse die but I do have a fairly large birdcage one from way back so I fished it out and had a bit of a play.  I drew around the die onto some white card and fussy cut to make a backing piece and then stamped some leaves onto this before sticking the layers together and yes, I think it does vaguely resemble a fancy sort of greenhouse.  Next I die cut some flower pots and found some flowers and leaves left over from a previous project.  So far so good - next move was to stencil a brick background and assemble everything.  I know it's not a greenhouse but at least it has enabled me to make the card design which came into my head inspired by seeing the original greenhouse stamp set and another potential purchase avoided ... for the time being at least 😄😄 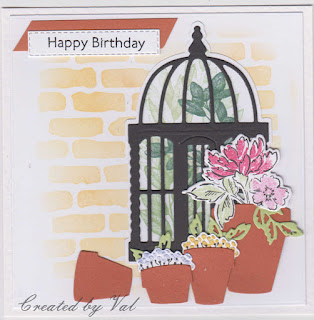