Well, I've written all of my Christmas cards and discovered that I have lots left over so I really must put the seasonal dies and stamps back into their boxes until next year - didn't realise I'd made quite as many and of course I did have a few left from last year, and so they mount up 😉😉.

I have a great grandson who will be one year old at the end of the month so thought I'd get ahead of the game and make a card for him.  While I was searching through my stash recently, searching for something in particular (as I'm sure we all do), I spotted a set of Forever Friends stamps which I've had for many years and I know they've not been used for a while so I made a mental note to use one of them for this card.  Struggled a bit to find some suitable background paper but managed to find something on an old CD and I've added some die cut bunting with his name on and a nice large figure one.  While I had the stamp set out I stamped and coloured two or three other images which I can use to make cards to pop into my box. 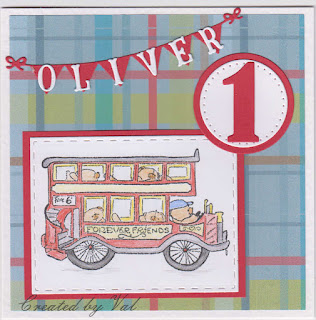