I decided to have a bit of a tidy up and to take a break from making Christmas cards, at least for a short while, but you know how it is.  I kept coming across bits and pieces which I'd maybe die cut and not used, papers and card just crying out to be used up and also stamps and/or dies which I'd taken out to use because there were ideas buzzing around in my head.  The result is that I now have a few more Christmas cards to pop into my box and the desk remains in a state of 'Christmas Chaos'.  Too hot for tidying today as the heatwave seems to have returned - any excuse

The die used on these two cards was one which I won in one of the grand Christmas prize draws on Pixie's Playground Challenge - must have been about three years ago I think and I'm ashamed to say when it arrived (just after Christmas) I put it away ready to use for the following year's cards but somehow that didn't happen.  Shame really because it is a super one to use and quite fun - at least it has had two airings so far this year.  It would be a good one to use for 'batch-baking' although that is something I very rarely do.   More little white 'dots' saved from the first one (see my previous post) 🤣 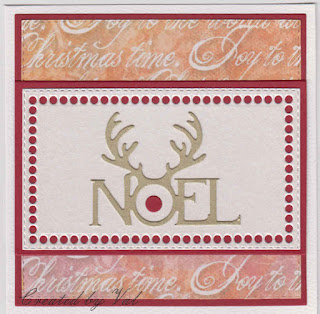 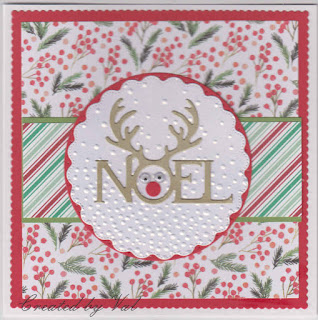 Noel Die - from L'il Inkers
Papers and Card - ,mostly from my large snippets box
Posted by Aquarius at 14:31