Inspiration and ideas for cards come from many different sources and the idea used on this card was spotted while trawling through some YouTube crafty videos.  Often far more entertaining than watching TV in the evenings 🙂 I find.  This is also yet another good way of using up some of the scrap card mountain.  Circles were die cut from three colours of card and then each was cut in half before reassembling in whatever way you think fit.  The same thing could probably work with squares or other shapes but this is my first 'play' with the idea.  There was a stray donkey hiding amongst the bits and pieces on my desk so he has been used to complete this card  Sentiment was stamped onto a strip of card which has offset fishtail ends punched and I've added a few coloured sprinkles. 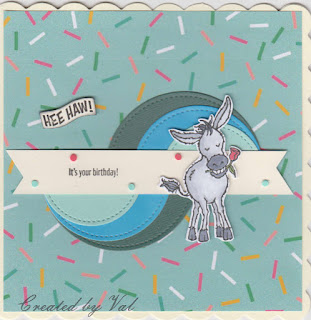