I knew I had a set of cameo dies with ornate frames and also knew that one of them had two heads on it so decided to make maybe an Anniversary or Congratulations card. What is it they say about 'best laid plans' - when I came to assemble the components I realised that there were two female heads on the cameo so I changed the sentiment.at the last minute.  Started by die cutting the cameo in cream and the ornate frame from some card to tone with the large background piece.  A cream square was cut and embossed before trimming the panel and adhering them together.  Sentiment was stamped onto a piece of cream card which was then laid over a fancy shaped label.  This label is actually the same colour card as the large square but it actually appears darker in the picture.  Finally added two swirly corners at the bottom. 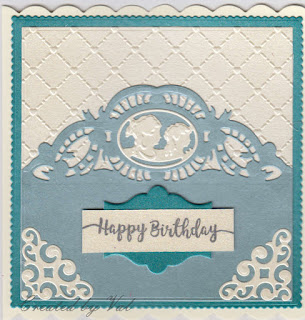