Well worth popping over to the Playground to see the super cute card which Di has made using what is the prize for this fortnight - a real fun set of stamps with matching dies.  You might have guessed I will be asking for my name to go into the draw this time around.

Anyway, on to my snippets card for this challenge which was prompted by coming across a box containing quite a lot of pre-cut shapes which I must have bought years ago and I'm talking about well before die cutting became possible in our own craft rooms.  I think it is about 15 years since the Big Shot arrived on the scene so I've had this box for ages.  I've used an oval frame and four little squares with text on them from the box (hardly made any inroads into the contents) and then set about using up more of my snippet mountains to make something from this start.  Cut four brown squares to back the printed ones, an oval in cream to go behind the frame and a selection of small snippets to make the flowers and leaves.  Even the music paper was a snippet left over from a much larger piece.  The message was stamped onto the cream oval using the Misti for positioning. 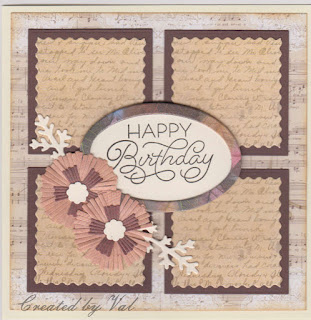