I'm a bit later than usual checking into the Playground this time but I'm here now with a card which has used a selection of snippets from my 'mountain' of scraps.. I started with a piece of background paper from a pad I've had for ages and this was over stamped with feathers.  Next layer is a scrap of white card which had been embossed and I brushed this over with some purple ink to match the die cut feather (cut from a snippet of mauve) and layered onto a shape die cut from another snippet of card.  Finally added a couple of cogs which were lurking on my desk just waiting to be used up and a banner die cut from a purple snippet with a punched sentiment.  There is still time for you to catch up with this challenge before it closes and to be in for an opportunity of being in the draw for a prize. Well worth popping along to see what the clever Di has done with some of her snippets this time 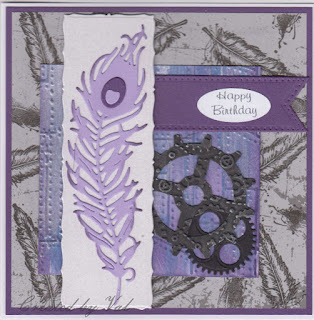