I can hardly believe that I've done absolutely no parchment work since last year which was when I had cataract operations on both eyes (at different times) and had real trouble seeing properly in the months between the two treatments and until my eyes had settled after the second one.  I abandoned all thoughts of doing that sort of close work and put the things away but  I've decided it was about time I got it all out again. I now realise that I'm almost back to square one and the learning curve has to tackled again - surprised just how much I'm out of the swing.  I persevered and have actually produced a card but lots more practice will be needed before it returns to it being a relaxing and mindful exercise.  Various Groovi plates were used to compose this image. 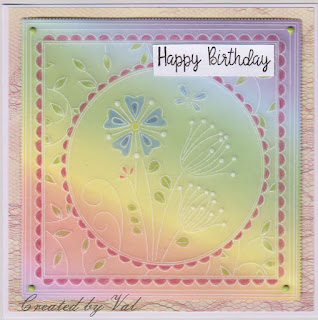 Thankfully the weather is a bit cooler now thanks mostly to the rain which we've had overnight and this morning.
Posted by Aquarius at 15:28