Filling some gaps in my box of cards and this time it is one suitable for a male.  I have lots of dies (too many I guess really) but I have been collecting them for some years so it does pay to go through the various storage boxes now and again, partly seeking inspiration and partly to remind myself of anything which may have been forgotten.  I knew I had this clock die but have to admit I had no idea which box it was in but luckily I managed to run it to ground.  I cut it from some heavy patterned paper (almost card weight) and then cut a larger circle from a different design in the same pad.  The hands were cut from a scrap of plain black card and the cogs from scraps of kraft card.  The old music design piece was sponged with distress ink to give it some age and a small spray of ivy leaves was die cut from a loose page from an old book which was falling to pieces (very useful to have book pages so wouldn't thrown them away).  The sentiment was a download sized in a graphics programme and punched out before layering onto a small cog. 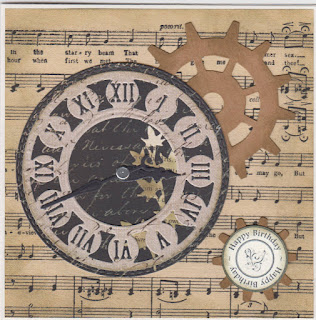