A Drop of Alcohol

No, I've not been drinking it but have dragged my alcohol inks out from the depths of my stash, prompted by seeing the post HERE from Di (of Playground fame) who had been trying out some of the new Tim Holtz silver sparkle card which I believe was developed with alcohol inks in mind.  I treated myself to some of this card and it certainly does have a lovely surface appearance.  Luckily my inks hadn't evaporated, although I must say they've been in storage for a long time, and I coloured a piece of the sparkle using pinks and purples blended with blending fluid.  There is a link in Di's post to a good video on this topic, well worth watching.

I've made a card using the resulting piece behind a window style die.  First I cut a square of lilac card using a stitched square die before placing the window die in the centre and cutting it out.  I then repeated this with white pearl card so that I could mix and match.  The sparkle piece was trimmed to fit behind the 'window' in the lilac layer before placing the white frame into the centre.  This is much simpler to do than to describe!  A sentiment was stamped onto the bottom of a white card blank using my trusty Misti.  The next move was to die cut a flower in black to match the sentiment and contrast with the other colours.  I've been left with a white stitched square piece and a lilac window piece ready to make into a similar card.  There really is a super sparkly effect on the coloured card but sadly the picture doesn't do it justice. 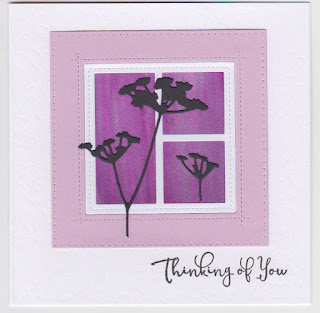